The Connecticut Radio Information System, Inc. (CRIS) is a nonprofit 501(c)(3) radio-reading service that has been serving people who are blind or print-challenged for nearly four decades. We operate with a small staff and a large number of dedicated volunteers who provide voice talent.

We provide a variety of audio recording services for people who have visual, learning, emotional, intellectual or physical disabilities. Programs powered by CRIS Radio include: CRIS Radio; CRIS Streaming (hospitals and other health care facilities, such as nursing homes and assisted living facilities); CRIS On Demand; CRISKids, CRISAccess (museums), and CRIS En Español.

CRIS Streaming is offered through the in-house television system at Saint Francis Hospital in both English and Spanish.

With the use of Internet radios, CRIS Radio is installed in 113 assisted living facilities in the state.

Currently, 86 schools are accessing CRISKids Audio Library, in which we offer custom recording for teachers to meet the specific needs of their students.

CRIS programs keep people informed about the world, the nation, Connecticut, and their local communities, and has proven to be a vital resource for individuals who are unable to access printed material. CRISKids and CRISKids for Schools offer educators a low-cost tool to help improve student literacy, reading comprehension, and reading ability.

In addition to accessing general news featured in newspapers, CRIS listeners also learn about products featured in supermarket and department store ads, upcoming events, local obituaries, and the latest in sports and business news. Two talk- shows also are produced and broadcast by CRIS Radio. They include: “Focal Point,” featuring issues concerning the blind, handicapped and elderly community and “Positive Futures,” featuring important information on all matters pertaining to employment for people with disabilities.

CRIS operates 24 hours a day, seven days a week. Programs originate from our broadcast center in Windsor, as well as from our regional satellite studios in Danbury, Norwich, Norwalk, Trumbull, and West Haven. Programs can be heard on pre-tuned radios (provided free), cable systems, the telephone, Internet radios, computers, and mobile devices.

CRIS employs a staff of four full-time and three part-time people. We rely on nearly 300 volunteers statewide to help with the production, programming and the day-to-day operations of CRIS.

Volunteers script, read, and operate the control board for daily broadcasts. Our volunteers also help with office work, bookkeeping, marketing, radio distribution, serving on our Board of Directors, and representing CRIS as speakers at various civic organizations.

CRIS receives financial support from a variety of resources including private foundations, businesses and corporations, Lions Clubs and other civic organizations, individual donations, the state Bureau of Education and Services for the Blind, and fundraising events including our annual CRIS Radio Classic Golf Classic, and CRIS Radio Dining and Dancing in the Dark gala.

As Connecticut’s talking newsstand for the blind and print-challenged, it is the mission of CRIS Radio to provide the highest quality, electronic reading service in the state.

CRIS helps enhance the quality of life of its listeners by providing access to the same printed news and information that their family, friends, classmates, and colleagues enjoy.

It is our current goal to become a national model for other radio-reading services. 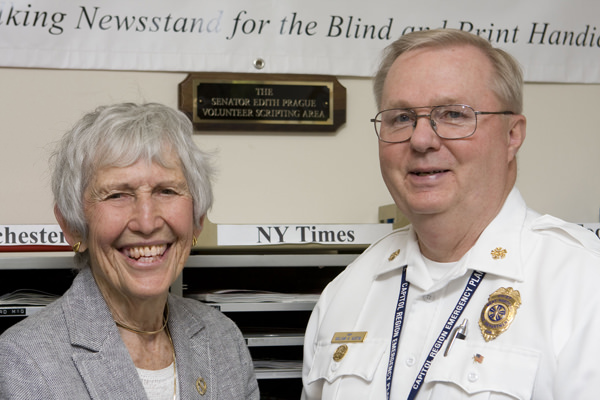 ‘As we at CRIS Radio celebrate our past 30 years, we also look to our future on how to best meet the needs of our next generation of CRIS listeners.’ – Bill Austin (right), CRIS Board Emeritus

CRIS listeners are individuals who, because of a visual, physical, intellectual, emotional or learning disability,  or due to their medical treatment or medical condition, are unable to read printed material or turn pages of a publication. This may be due to vision impairment resulting from diabetes, cataracts, macular degeneration, glaucoma or other disabilities, such as arthritis, dyslexia, Parkinson’s, ALS or Cerebral Palsy.

CRIS does not discriminate and provides access to its service without regard to sex, race, age, ethnic background, religion, degree of disability, or financial status.

How Can CRIS Be Heard?

CRIS programs can be heard on demand, streaming, or broadcast on a pre-tuned CRIS radio. The following devices can also access CRIS programming: