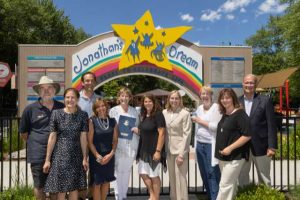 Jonathan’s Dream Park, an accessible and inclusive playground designed for all ages and abilities, is even more accessible now thanks to CRIS Radio’s GPS mobile app that helps guide visitors who are blind or have low vision through the park.
State and local officials are joining Amy and Peter Barzach, whose son Jonathan was the inspiration for the accessible playground, to celebrate the launch of the CRISAccess Mobile App at the playground on June 16.

The mobile app enhances the playground’s accessibility, particularly for people who are blind or have low vision. Audio descriptions of the playground equipment are triggered by the smartphone’s GPS function or scan of a QR Code.
The $1.2 million playground is located on the Mandell Jewish Community Center campus on Bloomfield Avenue in West Hartford.

Creating an audio tour of the playground has been a team project spear-headed by Ronit Shoham, the playground’s project manager, who worked with the Barzachs to rebuild the original Jonathan’s Dream playground in 2017.
“This new mobile app offered by CRIS Radio is an incredibly powerful tool for community access in outdoor spaces,” said Amy Porter, commissioner of the state Dept. of Aging and Rehabilitation Services.

“As we move into warmer weather and people spend more time outdoors, this technology has the power to enhance the social and cultural experience for many people, particularly individuals who are blind or have low vision,” Porter said.

“Jonathan’s Dream Playground, already designed for all, is a perfect setting to launch the app.”Lt. Gov. Susan Bysiewicz also praised the collaboration. “Playgrounds and parks are wonderful spaces for children to play, build friendships, and most of all, have fun,” she said at the event. “This app will provide children with visual impairments in the greater West Hartford community a safe and inclusive place to play with their friends and neighbors. I am thrilled to celebrate this launch today; it represents real progress in building inclusive public spaces for children across Connecticut.”

Shoham approached CRIS Radio, the only radio-reading service in Connecticut that broadcasts audio versions of newspapers and magazines for people who are blind or unable to read due to other print disabilities, such as Dyslexia, Parkinson’s disease, or other disabilities, to create an audio tour of the playground. The 42-year-old nonprofit has expanded its family of audio services with the help of new technologies.

“The new Jonathan’s Dream addresses the needs of people with various challenges,” Shoham said. “We want to make sure that kids and adults with visual impermanent can join in the fun and celebrate life at Jonathan’s Dream.”

The Greater Hartford Host Lions Club raised funds towards the development of the mobile app, and the balance was funded through a technology grant awarded by the Hartford Foundation for Public Giving. Matthew Woods Webber, a member of the Greater Host Lions Club, was also approached by Shoham about how the Lions could help with the expanding access at Jonathan’s Dream Park because she knew about the club’s focus on helping people who are blind or vision-challenged.

“We knew we wanted to help, not only because of the natural fit with our mission, but because we know how important a Jonathan’s Dream is to our community,” Webber said.

Paul A. Young, chairman of CRIS Radio’s Board of Directors, expressed gratitude to the Lions Club and HFPG for its financial support and collaboration with the team at Jonathan’s Dream Park. “CRIS Radio is grateful for the financial support that made the development of our CRISAccess Mobile App using GPS a reality,” Young said. “We also are honored to work with Ronit, and other Mandell JCC volunteers and staff who share CRIS Radio’s commitment to improving access for those with disabilities.”